I think about this sometimes.

My five-year-old son has two big sisters, all fairly close in age. He is growing up in a world of American Girls, fairies, glitter, pink and purple, accessories, Taylor Swift, playing school and “family” (apparently that is what kids these days call “house”), and saying “awwwww” at the site of a puppy, kitten or other baby animal.

His “boy” shines – everything naturally becomes a weapon (from sticks to strategically chewed graham crackers), punching himself in the head and dramatically falling down and other roll your eyes Chevy Chase slapstick antics are the mainstay of his comedic arsenal, and he’s drawn towards superheroes and ninjas. He is way into Star Wars and Legos. 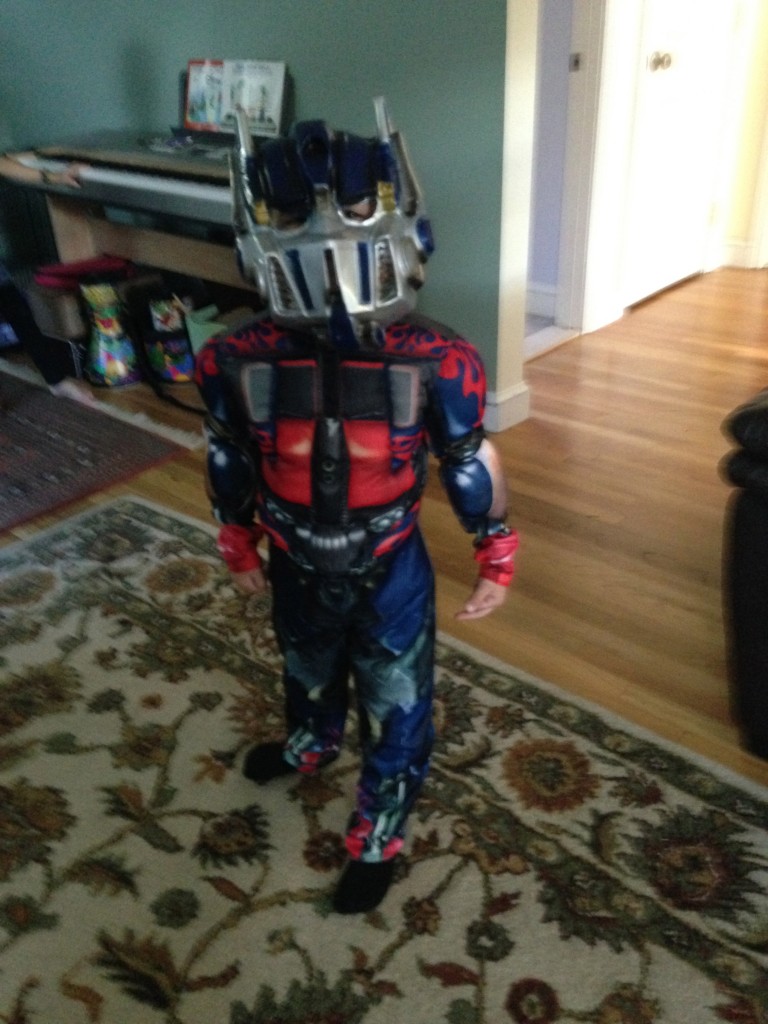 When my son was two, he insisted on wearing a rainbow and pink beaded necklace everywhere. He still loves to accessorize. He has a love affair with boots. He spent three years in cowboy boots and a couple of months ago switched over to black motorcycle boots. He envied some black knee-high boots with thick heels while shopping for my daughters’ back to school sneakers. He pleaded and campaigned for the boots telling me that we could just cut the bows off and they’d be perfect- he didn’t mind the embroidered hearts. I started looking for motorcycle boots. I thought he was going for a look like Ponch and John from Chips, but after, he sent me to ask a friend’s mother for a lead on his classmate’s boots that he liked and she referred to her daughter’s footwear as more of “go-go boots” than “motorcycle boots.” 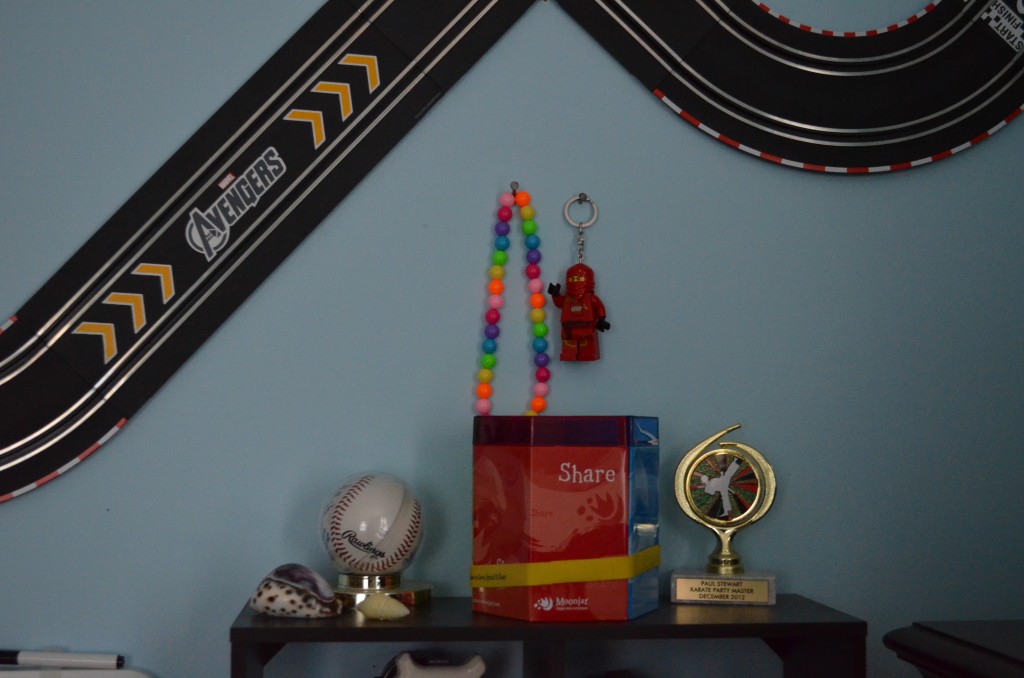 My son has a coloring book picture of Wonder Woman on his wall that he colored some time ago. It is ripped and not his best work and was slightly covered on his magnet board, so when we were cleaning out his room a few months ago I asked if we could recycle it. He said “No, I need that to remember what I look like when I turn into a special agent.” My reply was “That’s Wonder Woman.” He said, “I know. But that’s what I look like.”  “Your disguise is a tough girl?” “No, I just look like that.” We taped it up on his wall and it has been there ever since. 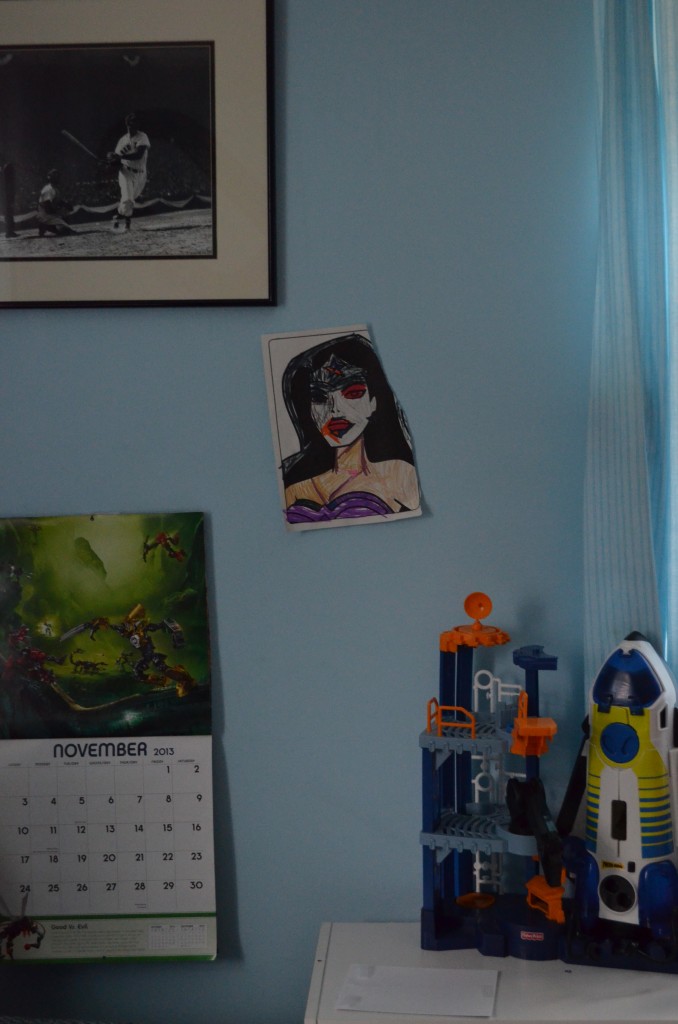 For my 9-year-old daughter’s birthday this summer, my son opted to watch the Saige, the American Girl, movie with some girls instead of the alternative option of Star Wars upstairs. He preferred not to miss out. The next day, he chose to go to the American Girl store instead of staying home and a second chance at watching Star Wars. He brought one of my 7-year-old daughter’s American Girl dolls with him to the store, after he brushed the doll’s hair out and dressed it to get ready, as his sisters did for the dolls that they each brought along. He skipped along with his sisters and carried the doll through the mall and into the store, even when my daughters pointed out he may have been the only boy in the store.

My son’s favorite color is purple. Sometimes he fights over the pink cereal bowl and matching spoon. He picked the ladybug Pillow Pet out of all of the dozens of Pillow Pet options. When my mother-in-law cleared some things out at her house, he asked for the garbage can and the pink dolls to be the mommy and sister for some smaller baby boy dolls that were the equivalent of his blankey since infancy. The dolls now live in his bed, the garbage can was not actually available so it is still at my in-law’s house.

Maybe you are saying “uh oh.” Or “Oh, that’s nice that she lets him do that stuff.” I’ve heard those comments. Maybe you aren’t thinking anything and are just waiting for me to get to my point. (To be honest, I’m not sure I’m going to be able to make my point.) If you know my boy, you are probably just smiling and nodding.

Why is it easier for girls to cross over the line into typical boy things than boys to try out the girl stuff? Not only is it easier, if a girl dresses as Batman or a football player for Halloween, or enjoys sports, it’s “Good for her!” I’ve heard many grown women declare with a sense of pride “I was something of a tomboy as a kid.” What’s the equivalent for boys? Is there the same pride in a grown man declaring, “Molly was my favorite American Girl and I served a mean tea party as a kid.”

I grew up with two older brothers. I didn’t like dresses, Barbies or accessories. I played sports. I played the trumpet. I hooked my own fishing bait. But I also liked stuffed animals, Cabbage Patch Kids and reading Nancy Drew.  My son is similar- equal opportunity, soaking in whatever is around, and making preferences based on what feels right and makes him happy, not what he’s told he’s supposed to enjoy.

My son is happy, funny and easygoing. He can hang with anyone, and will go from pushing and shoving and getting warned about being too rough playing “Pirates of the Caribbean” with his buddies on the playground to playing “puppy club” with the girls. He’s generally too busy pretending to trip over a ball to try to make people laugh to excel at sports, but he’s typically in the mix working hard. He’ll listen to Betsy-Tacy or Little House books as eagerly as listening to Captain Underpants or The Avengers. He likes to carry stuff with him in a bag and doesn’t care if it is an Indiana Jones satchel, a pink zebra print Justice purse with someone else’s initial on it, or a used Ziploc bag. One night he’ll be playing in bed with army men blowing each other’s appendages apart, and the next night he’s in bed playing that the African American dollhouse mommy is having trouble getting her kittens to settle down.

My boy is five and in kindergarten. He’s still little, but he’s at the age now where peers and the grownups around him start to notice little things. Girls and boys start to separate. Sometimes people think he’s different or something is going to be “wrong” with him. That makes me sad. There’s nothing wrong with him. And if he grows up into whatever their concern is, there’s nothing “wrong” with that either. While my girly girl nine-year-old comes home after a day of compliments for wearing a Tom Brady jersey handed down from the boy across the street, people laugh at my son and call him “weird” for going to school with five nails painted (we now do one hand to keep the remarks, looks and questions down).

This is just something I think about sometimes, this isn’t a big issue in our house. My boy doesn’t seem to have any gender identity issues to contend with, and we don’t struggle with fighting him on things of this nature. Besides the boots and wishing he had more clothes with some purple, he does not at all wish to wear dresses or frills, and loves wearing local sports gear. He grunts and farts, enjoys video games, doesn’t dwell on things and gravitates towards male playmates over female. My house is full of Ninja Turtles, Super Heroes, and Star Wars stuff and those are the toys my boy spends the most time playing with. But my house is also full of American Girls, sparkly beads and girls who like to play spa. I have no problem if my guy doesn’t want to be left out from a tea party, enjoys, participates or initiates a sister produced fashion show or stuffed animal spa, and fights over a Lego Friend because “she has the prettiest hair.”

I am sure that growing up a white middle class male will give my son some societal advantages.  I hope he doesn’t have to lose the part of him that thinks its cool to wear purple sparkly gloves or ask for a Tangled coloring book for Christmas. I don’t want him to limit himself to nail polish on one hand or not wearing purple because that’s not what boys do. I hope none of my children ever find it “weird” for others (of any age) to cross over gender stereotypes, or have to worry that people might think its odd to do something that feels natural to them and makes them happy.

And for those people who tell my son that he’s weird for wearing nail polish, watch out, you may someday meet the karate kick of a boy in knee high go-go boots. Or be invited to one heck of a tea party. 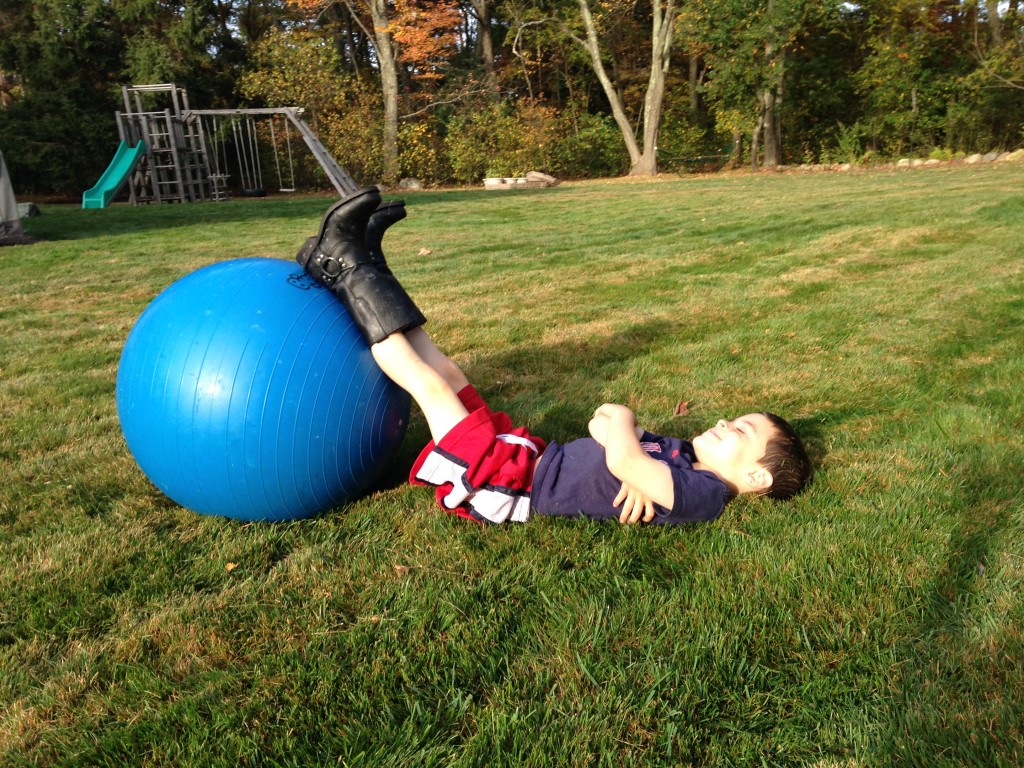