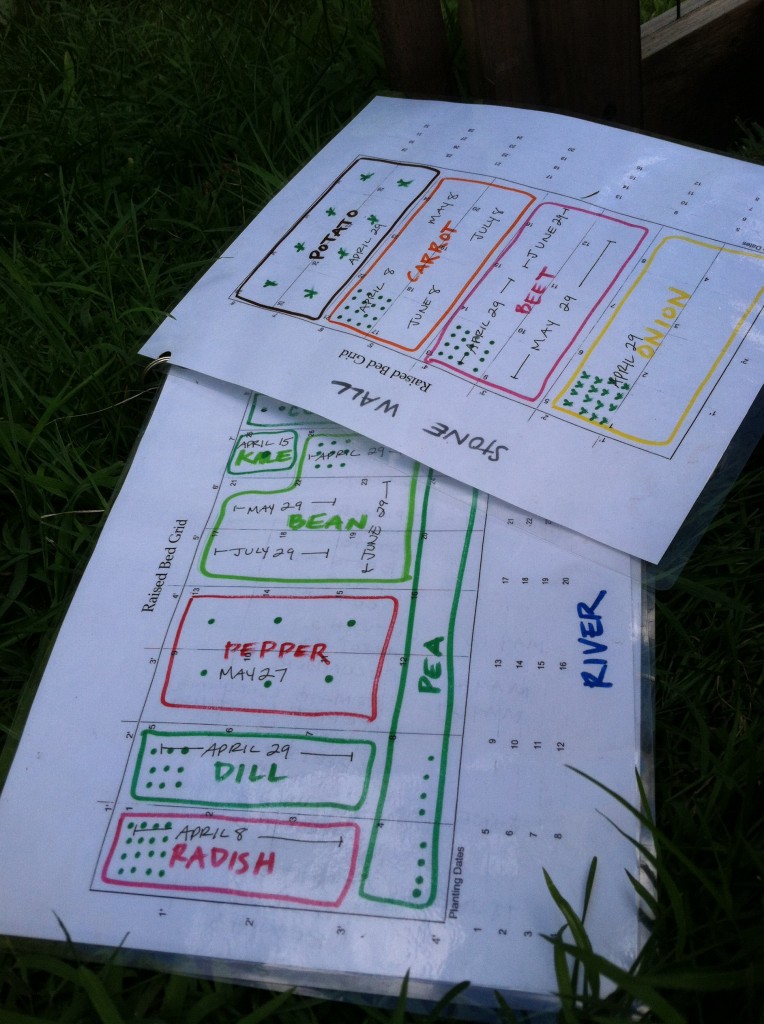 The Food Project made mapping of my garden beds easy this year. They suggest placing nails one foot apart on each side of the raised beds. After we did that we took yarn and connected the nails across from one another to create a big grid of 32 squares. This was great fun for my 5 year old and me to throw the yarn ball back and forth over the bed. Tada a grid is created. On a paper grid we shifted around the veggies to figure out what would go where depending on the sun, their height, the type of plant (root, vine, ext.). The Food Project manual had suggestions of what plants go well together as well.

We have four beds. One is the tomato sauce bed with various tomatoes and basil. One is a root bed with potatoes, carrots, beets, and onions. The other two are a combination of all the rest. Two types of veggies span two beds. The peas run all the way down the east side of the garden over 16 squares. Cucumbers are the only vine plant in the garden. We planted them in 2 sets of 4 squares with the path between them for the vines to fall.

One assumption I always made was that you don’t plant your garden until after Memorial Day in the north east. Not true. Many tropical plants should wait until the end of May – like tomato seedlings, basil, or peppers. But a lot of other vegetables can be planted as early as March. Check out “The New Victory Garden” by Bob Thompson. It is broken down by months, describing what and when to plant.

The dates of when to plant everything was incorporated into the paper grid. On the back of the paper grid I listed the dates and what to plant on each one.

And the laminator came in very handy since the map goes in and out of the house in various hands.