We got a dog almost three years ago. Gerbils a two years ago. Last year my kids all wanted their “own” pets. My oldest got a fish tank that she maintains in her room.  Upon seeing hermit crabs at souvenir store that we frequent when visiting family in Cape Cod, my middle began a quest for hermit crabs. We did some research and found out, as you may imagine,  it isn’t the best environment for a hermit crab to be purchased from a souvenir store and kept in the small small cages sold there.

Our research also revealed that hermit crabs are nocturnal, so I tried to let the phase of wanting them pass. After after no crustaceans showed up for Christmas and my daughter was still hooked on the idea almost a year into the request, two shelled animals showed up this past spring for her birthday. 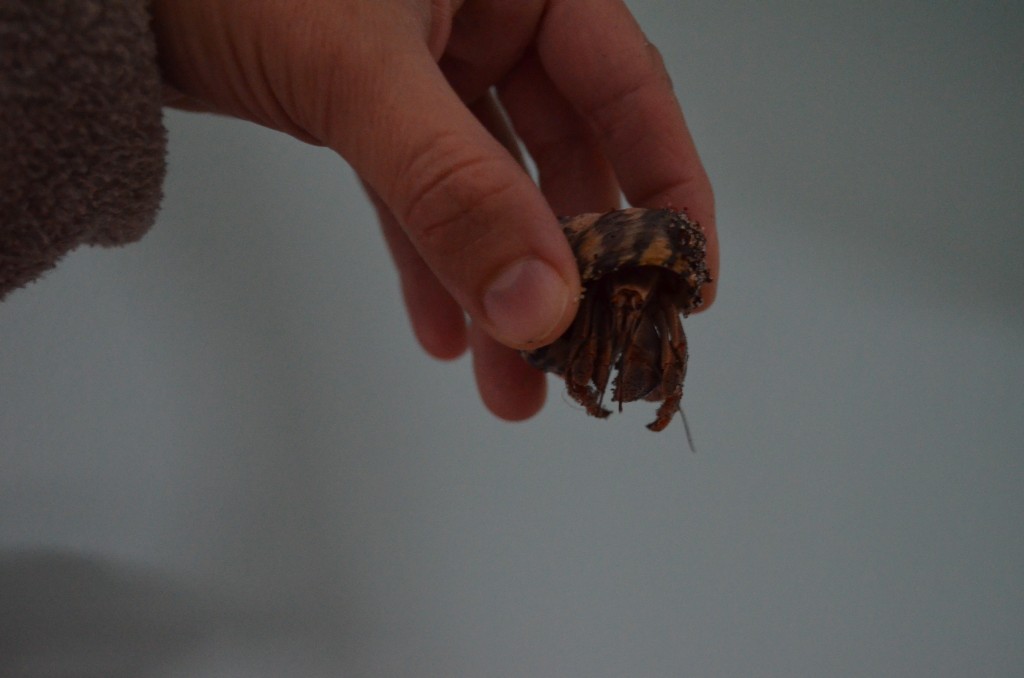 My daughter’s crabs are named Sandy and Tiny. They are interesting because you can watch them up close, but they require more upkeep that you might guess for something that you can rarely even locate in the “crabitat.”

These animals are indeed most active at night. The nighttime digging and moving around has become a comforting sound for my daughter. I kind of like it too. It’s not as aggressive as our gerbil who runs in it’s wheel all night. My son finds the noise creepy and hasn’t been able to to fall asleep during “sleepovers” in his sister’s room anymore. 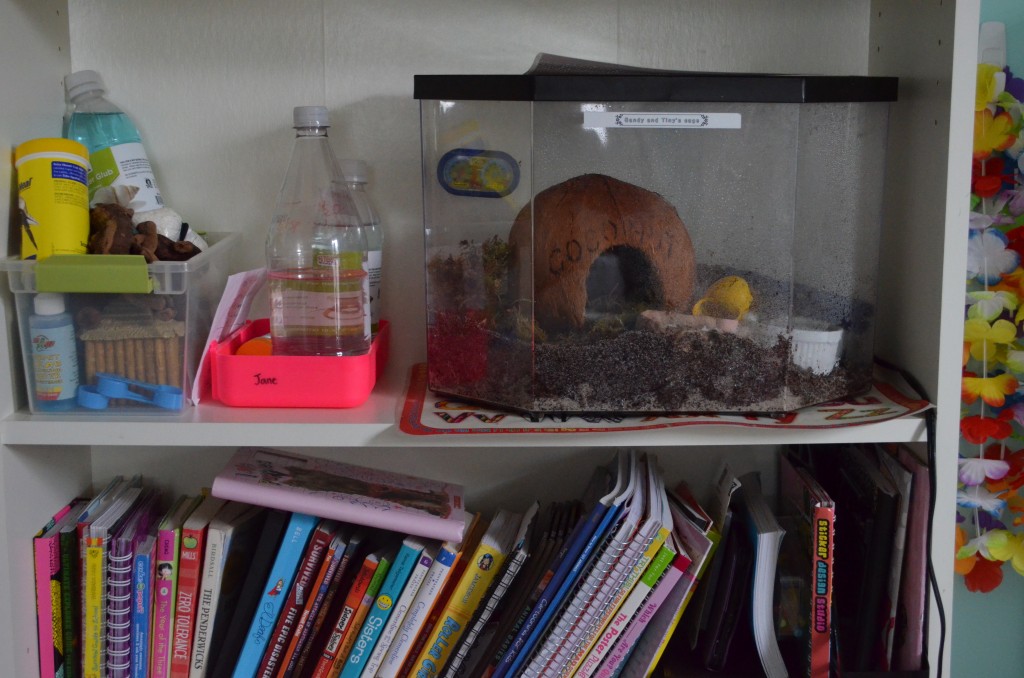 Both Sandy and Tiny have molted at least once since living with us, but neither has changed shells. This summer they were boarding with a friend during a molting and the caretakers reported Sandy “streaking” (hanging out without a shell), which is an odd behavior.

Once we were cleaning their home and we put in a coconut shell hut, left the room to fill a spray bottle for maybe half of a minute and when we returned Sandy had  somehow come out of hiding, climbed up the rounded coconut, and was sitting right on top of the coconut shell. We all agreed that that was the silliest thing a pet has done in our house and still laugh about it. 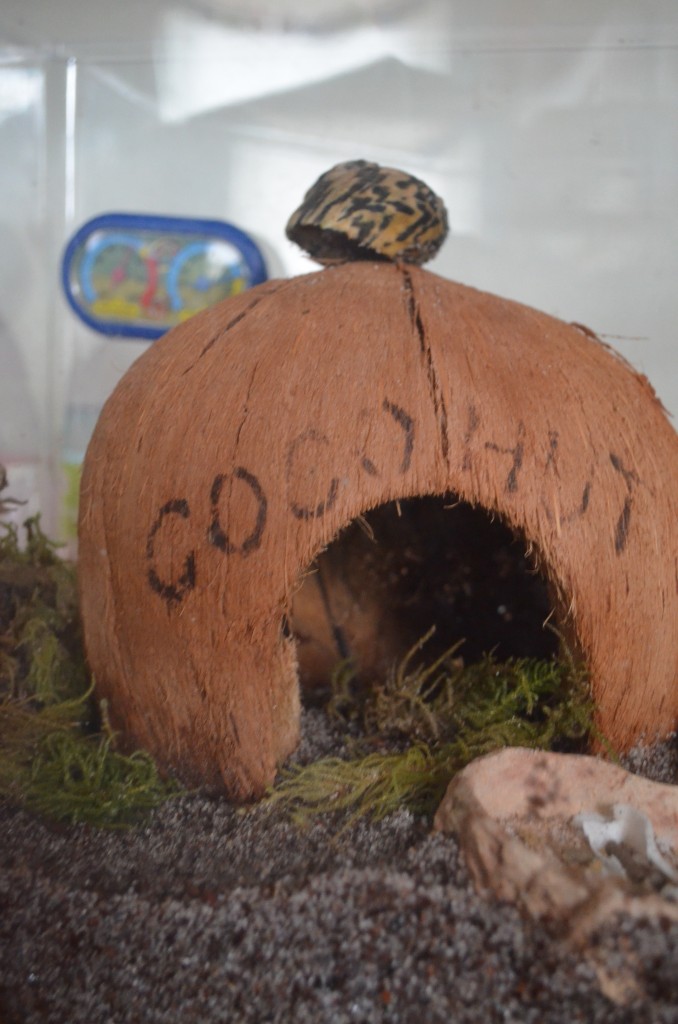 In general, the crabs and their home don’t smell. Sometimes, there is a fishy odor, but we think it’s from the food. They require fresh water, salt water and food (from the pet store and/or refrigerator), plenty of sand and/or coconut husk bedding, somewhere to hide, and a pretty consistent temperature and humidity. The temperature and humidity control around these parts requires an under the tank heating pad and spraying the tank with water at least once per day.

It is rare that we see the crabs do all that much. During tank cleanings we move them to a box or the floor, it almost looks like they are having fun climbing around or running, but they are more likely panicking and looking for a place to hide, so only sometimes do we make them come out just for fun. The crabs move stuff around in the tank and tip over the water bowls, drag sand into the water, and knock stuff over, which can frustrate my daughter if she is in a mode of trying to keep it clean. She’s not exactly one for keeping things clean, so this passes.

We rarely witness them doing much of the destruction, most of the time when we look in they are buried in sand and hard to find, or the curl into their shell when we come close. Tiny will always pop out of the shell when you hold him, but Sandy stays curled up. They don’t seem aggressive, though we haven’t tested or pushed it. We haven’t had them pinch or bite anyone. 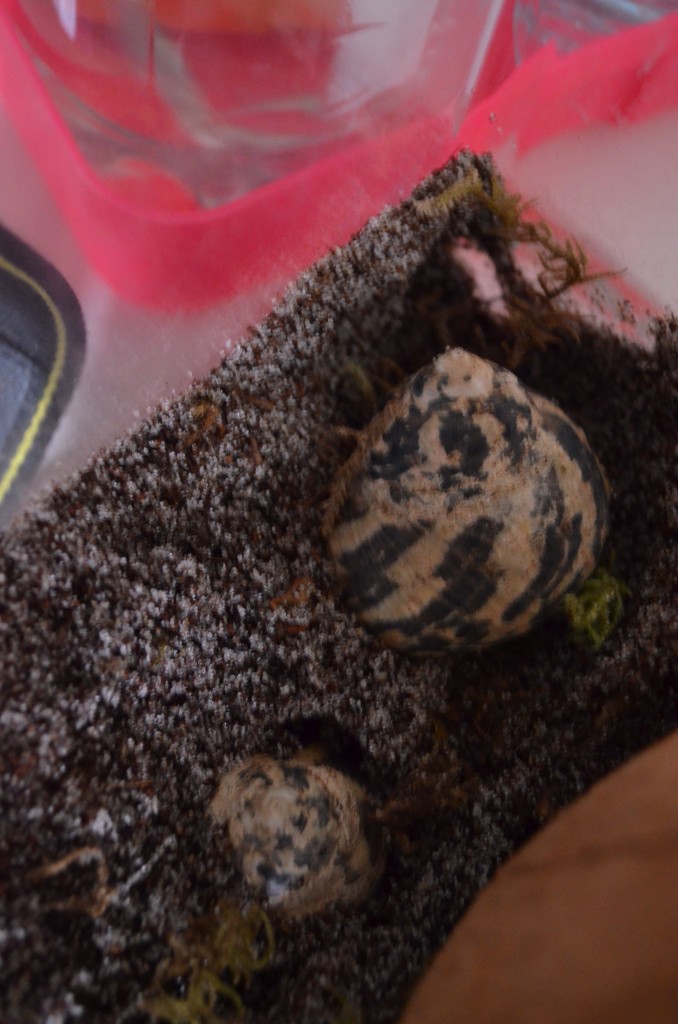 Last month, my daughter ran to her room for a blanket when we were watching TV and caught one of the crabs eating. It didn’t hide, and we recorded it with my iPhone. Watching the crab eat was not at all what any of us thought it would look like. It was pretty cool.

I’m not sure I would recommend hermit crabs as pets, but I wouldn’t necessarily recommend against it. For my daughter who wanted a pet in her room, and doesn’t much love rules, being told what to do, keeping things neat, or long term routine with no way out, this does allow her to have a pet and still learn that classic lesson in responsibility, compassion, dedication and caring for something that needs daily attention.  They seem heartier and a little more personality than fish, which is also good for this kid.