There is plenty of discussion out there on Lego Friends and the marketing of other pink or gender role oriented toys.

My son started having an interest in Lego sets a few years ago when he was three. Since then he has always liked and played with Legos regularly. When my boy started his Lego journey, my girls were not interested, except occasionally building the sets for my son. My kids are dollhouse/figurine/role play kids, and when Lego Friends came out a couple years ago, my girls wanted the sets. They ended up with a lot of Lego Friends for Christmas and birthdays last year. Lego Friends really appealed to my girls, even though Lego Friends sets really make little sense in the way my kids play. We’ve never been to or have much interest in juice bars. We all also find Lego Friends (and most Lego sets)  sort of hard to play with dollhouse style for extended periods of time. But they liked the characters, the colors, the cute animals, and even that they were for girls.

My girls came to know the Lego Friends through the sets, Lego Club magazine and reading some of the Lego Friends books. The Lego Friends characters started moving into the traditional Lego houses, and Lego Friends sets were disassembled and reassembled to fit their play needs.  My girls became more and more interested in all Legos. Their passion for Legos has grown and since last summer they play almost daily with Legos.

They have created their own Lego family and have stuck to and added to those characters for the past 8 or 9 months. Here is a family portrait I found on the iPad from a Lego family reunion that was held a few months ago. 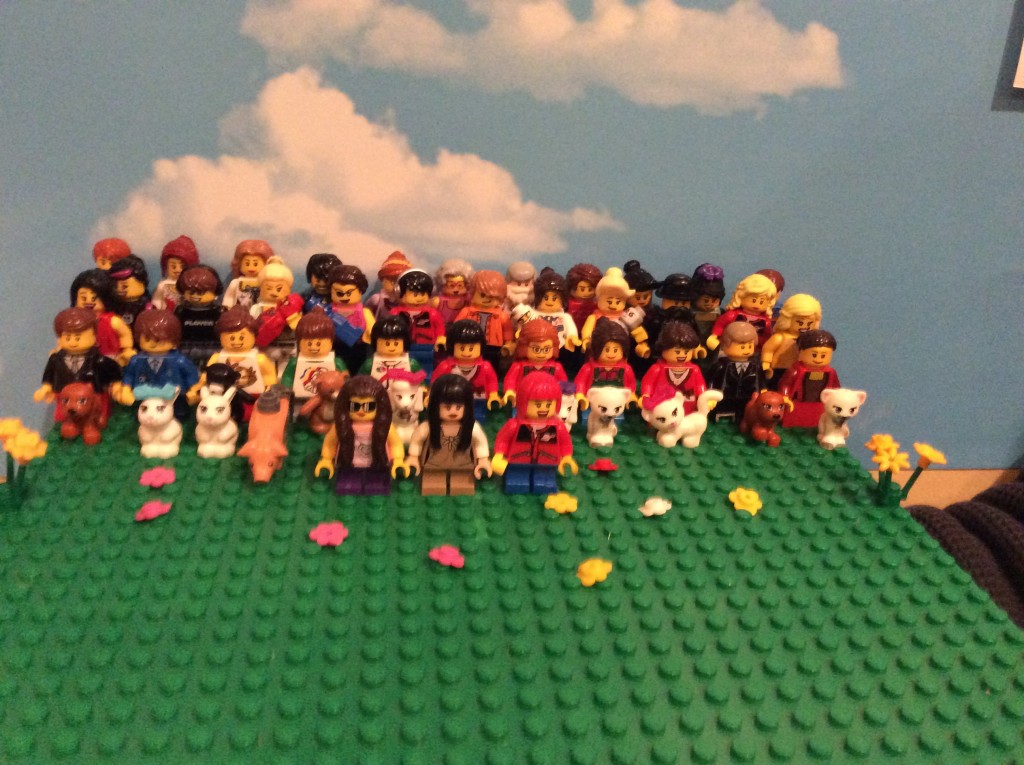 This Lego family is quite an ongoing soap opera, more Seventh Heaven than Melrose Place. There is always something going on. My girls refer to “playing with Legos” as “playing Big House” because the heart of the play is a large house that gets renovated and added onto frequently, and totally ripped apart and redesigned once in a while (most often when I make them take it apart after it gets dusty in the corners or the gerbil has shoved stuff out of his cage onto it). They used to each have smaller houses they would play with and work on separately, and then would play “Big House” when they were playing in the big house together. This is the current “Big House:” 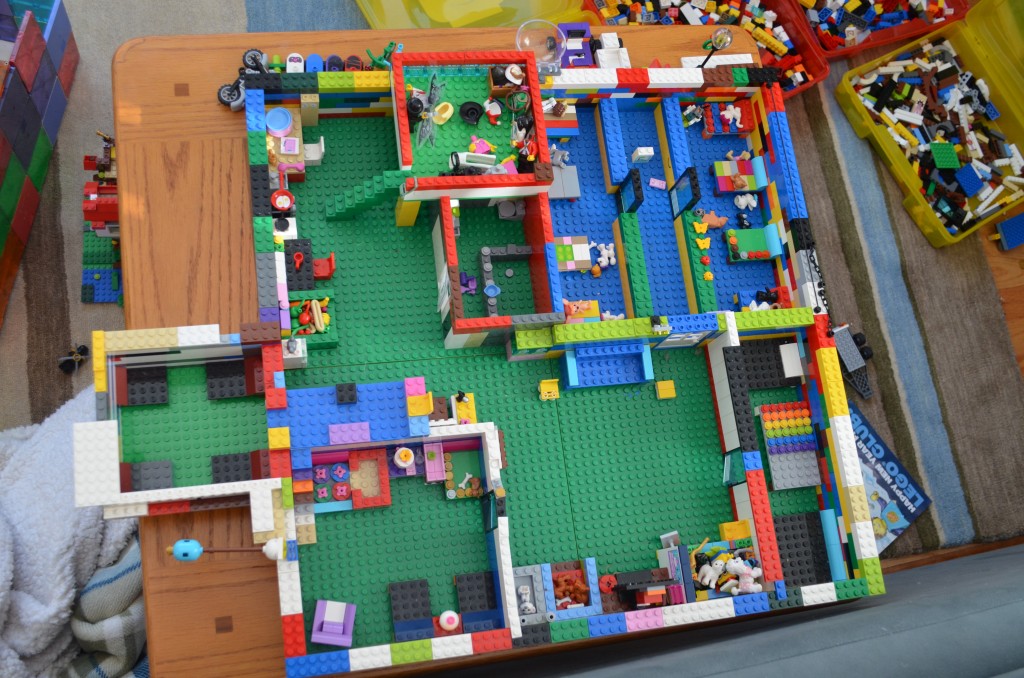 A lot has gone on in the Big House. My girls usually spend a week prepping, building, playing and replaying some of the bigger Big House events. Last week there was a wedding (including a MagnaTile church). There have been rock concerts in stadiums, lots and lots of school, lots of costume parties and trick or treating, plays, science fairs, dentist appointments, movie nights, museum visits, births, deaths, and on and on all built from Legos, Magatiles and paper for the past eight or nine months. They have made up TV series that the Big House watches regularly that my girls act out, complete with their own set of characters, catchy theme songs and one has a line dance number to the show theme song (in the last wedding picture below, the kids in the background are doing the dance to that song). There is a pop rock star (it’s a Lego Friend), who generally covers Taylor Swift and Katy Perry. They take family pictures and sometimes videos. There is LOTS and LOTS and LOTS of fighting and arguing, and LOTS of Legos all over the “behind the couch” designated Lego area where they are allowed to leave stuff out for longer periods of time without being asked to move them/pick up for vacuuming. There is lots of crying after guests leave, because guests almost always mess with the Big House, but repairing guest demolition has inspired some of the more creative Big House renovations. 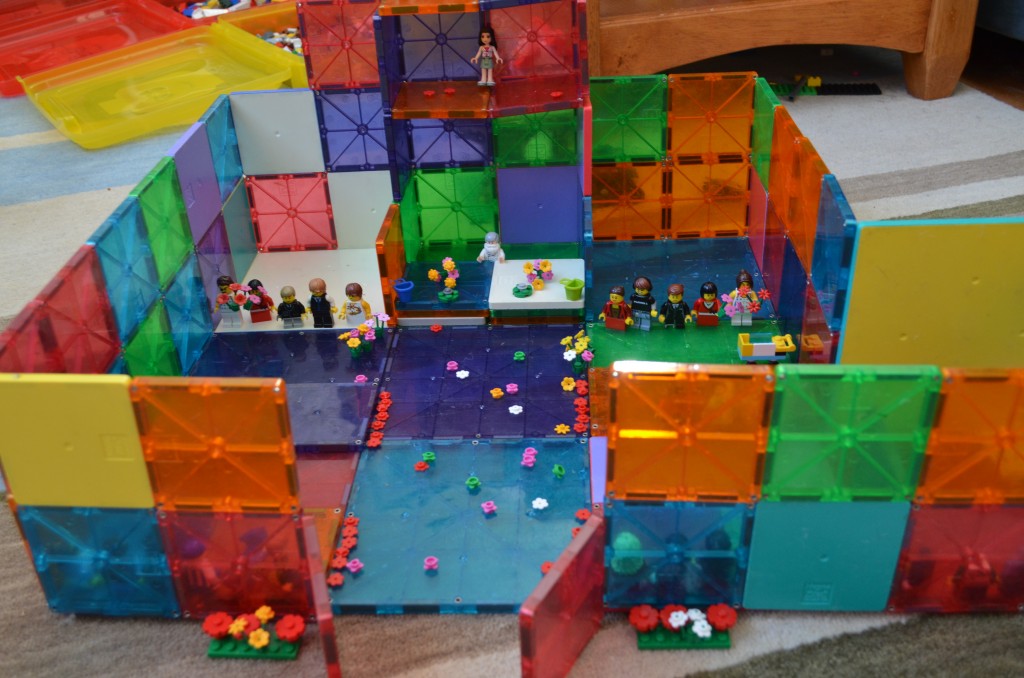 This is some good creative playing. It didn’t happen because of anything I did besides buying Lego Friends. I’m not sure if it would have happened without Lego Friends; they may have bought in to Legos with the production of a variety of minifigure girl hair, short/kid legs, cute pets and dresses started around the same time.

Most of the time, it doesn’t bother me, but I do think gender marketing can sometimes be humorous or offensive. I do not think that Lego Friends are necessarily a step back for equal rights. 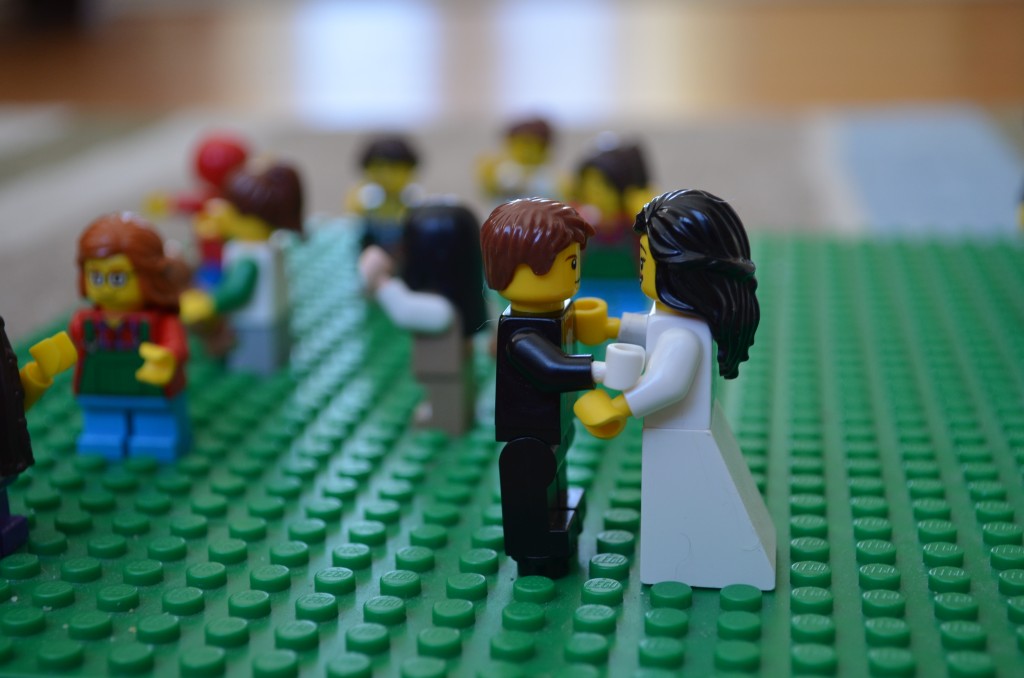