My mother-in-law is gifted with generosity, but not subtlety.

Same thing the next Sunday.

So I did it, Nonna. I made those pickled carrots. And they do come out quite pretty. 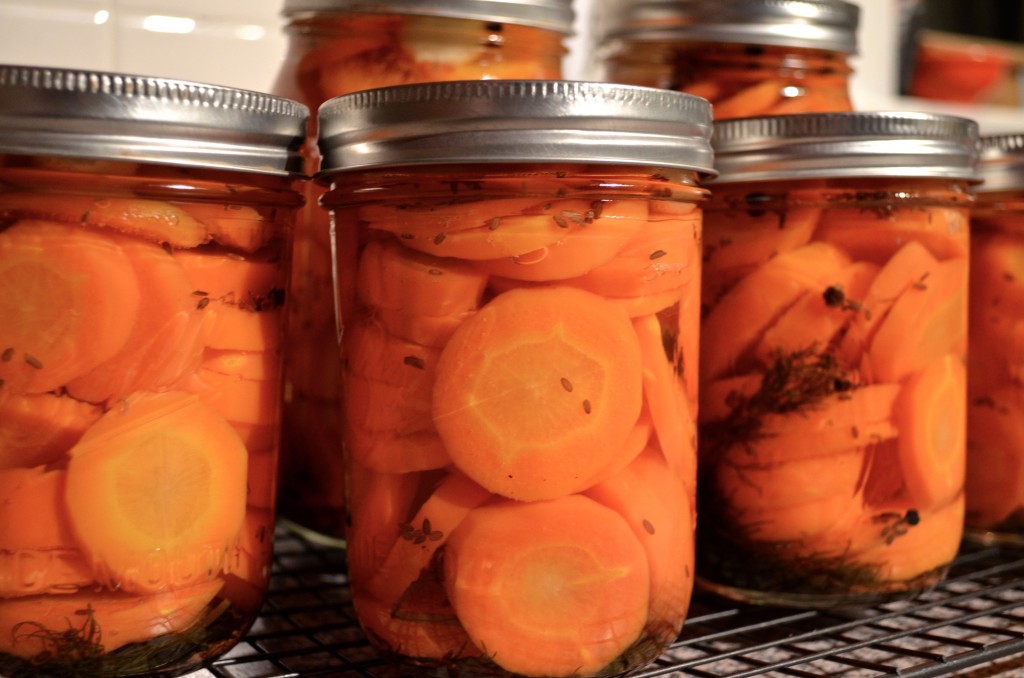 Thankfully making these put a dent in the carrot surplus. They did take longer than expected (peeling, slicing and blanching carrots, seems to take a lot longer than cleaning, slicing and stuffing jars of cucumbers). Aunt Diane’s recipe is for a 1 quart jar of refrigerator pickled carrots, but since I was doing it, the carrot pickles are allegedly so delicious, I wanted to stock up Nonna with pickled carrots for a while, and I had about 20 lbs of carrots on hand, I altered the recipe slightly. I quadrupled the recipe using about 7 pounds of carrots and then I canned/processed them for the shelf.

Aunt Diane’s recipe called for caraway seeds. I’d never put caraway into my pickles before and I’m not a huge rye bread fan, but added some and they aren’t overpowering. I’ve also never used dill seeds because I’ve had fresh dill on hand anytime I’ve made pickles in the past, the original recipe calls for both forms of dill. I had frozen dill sprigs from this summer and used that as well as seeds. I read somewhere that some people prefer dill seeds over fresh dill in pickles because the fresh dill tends to make the brine cloudy. You can count on me running a fresh vs. seed dill pickling taste and look experiment some time.

These carrots also pickle up pretty quick (24-48 hours). Much more satisfying than the 6 weeks we sometimes wait for my cucumbers. We opened them and tasted them after a couple of days and they taste pretty much exactly like cucumber pickles and have a good crunch. For the past few years, when making batches of pickled cucumbers or green beans I put half of a jalapeno or habanero pepper in half of the jars to have half of the batch be hot pickles. They have come to be our favorite and carrots are excellent candidates for a hot version too, if you are into that sort of thing.

These are good on their own, but would be great to add crunch, flavor and color to a salad (green salad, but especially something like a chicken, bean, pasta or tuna salad) or on a sandwich.