I often get asked if I’m making Christmas gifts. At the start of this year I had plans to sew a few gifts, but my husband finished part of our basement for his home office this year, and during the months of construction, my fabric and craft stuff was not easily accessible. I could (and would) get to it, but I felt like I had to have something in mind that I needed and would move everything around to grab just the necessity. In the past few weeks I’ve cleaned up my craft storage part of basement to lend itself more to open creativity. Now I can pull my stuff out, look through it, come up with inspiration or look at patterns and take inventory on what I have, but don’t want to start new gifts now because even if there is time, it becomes less fun with that looming deadline. Typing that all out makes me think that maybe I do have time, interest, inspiration and supplies for one of my ideas. Hmmm…

Anyhow, I have been working on a gift for my three kids and my brother’s two boys. These cousins are quite the crew when they get together (usually a few weeks per year). Right now the kids are 5, 6, 7, 9, and 9 years old and they all have fantastic role play imaginations. Typically what happens when they are together (or on long Facetime sessions as we live many states away) is that they are in a state of total immersion into their make believe world of Special Agents of one kind or another (international spies, sleuths, crime prevention, animal protection agents, whatever).

[Special request: If you are reading this, you probably know my kids, their cousins and/or kids who know my kids, so I trust that you will keep all of this to yourselves and not tell them. And if you are going to use this idea for kids that you know and those kids know my crew, please make sure that I’ll still be able to surprise my Special Agents.]

I collected some stuff for the Special Agents. My original idea was to sew each agent his own bag and/or to make a sort of portfolio for his tools. But in the end, Special Agents probably don’t want flashy bags; they need to blend in. This band of Special Agents also seems to always be in a hurry running here and there, so the need to just throw stuff into their bags and jet, and not worry about getting it into the specially designed pockets is imperative. I bought  drawstring nylon bags cheap ($1.79) on Amazon (this is an affiliate link). 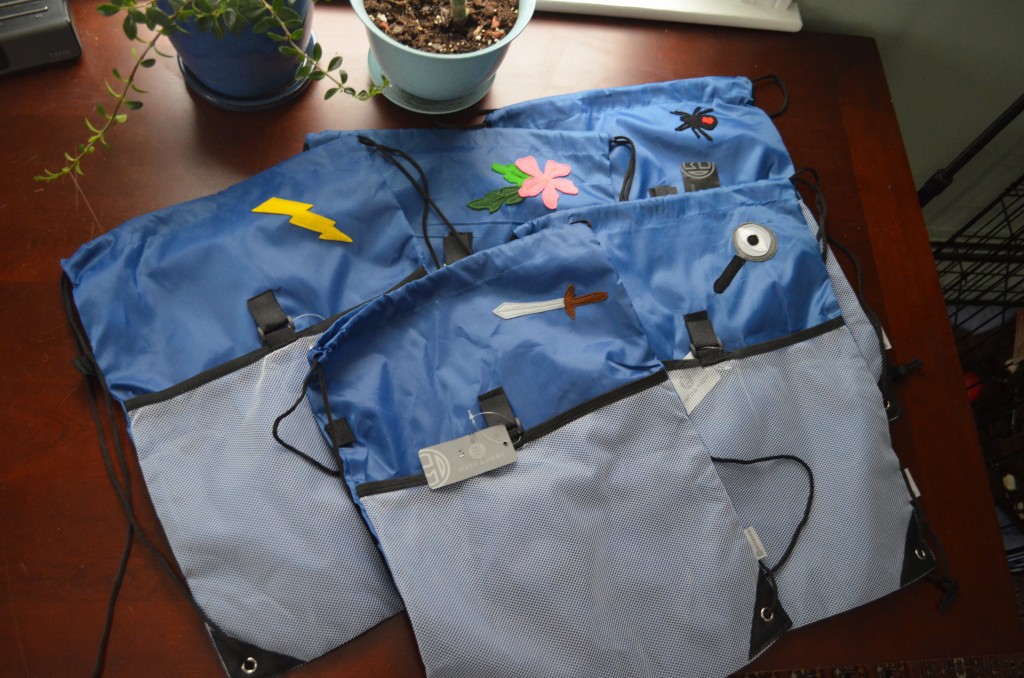 Figuring she’d discover the stuff wherever I hid it anyway, I recruited my nosiest Special Agent (my 7 year old) as an informant and we came up with an emblem for each of the kids based on their Special Agent names and personae. I used some wool felt to make an emblem for each bag. I put self adhesive tearaway stabilizer on the inside of the bag under the emblem to keep the nylon from wrinkling/pulling/puckering when I top-stitched the emblems on each of the bags. I had no problem stitching them on with my machine. (So I guess I did sew a little for this gift, but it definitely isn’t a sewing project.) 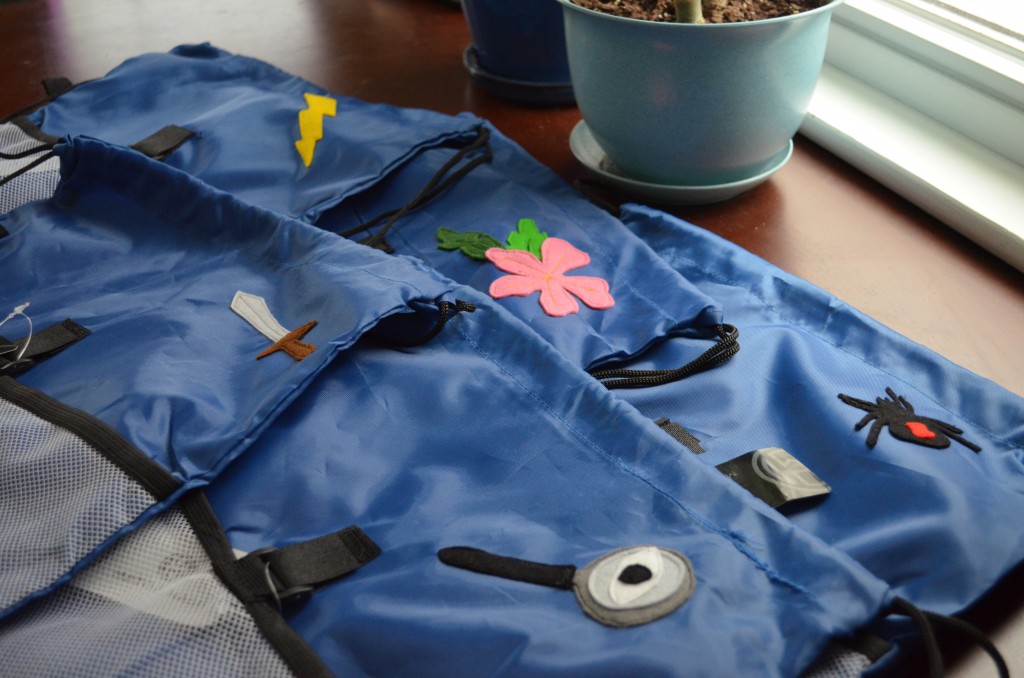 To fill each bag,I’ve been collecting stuff when I see it on sale places, mostly Staples. I also ordered a few things from Ebay and Amazon. I kept in consideration that we’ll be inside at Christmas, so didn’t add things that work more for outside play (walkie talkies, rope, weapons), I also excluded things like finger print ink pads or even markers which could lead to a mess in their frantic play. Because these kids play Special Agents often, they do already have many Agent tools and items (invisible ink, disguises, cypher wheels, etc.) so I also didn’t bother with that stuff. 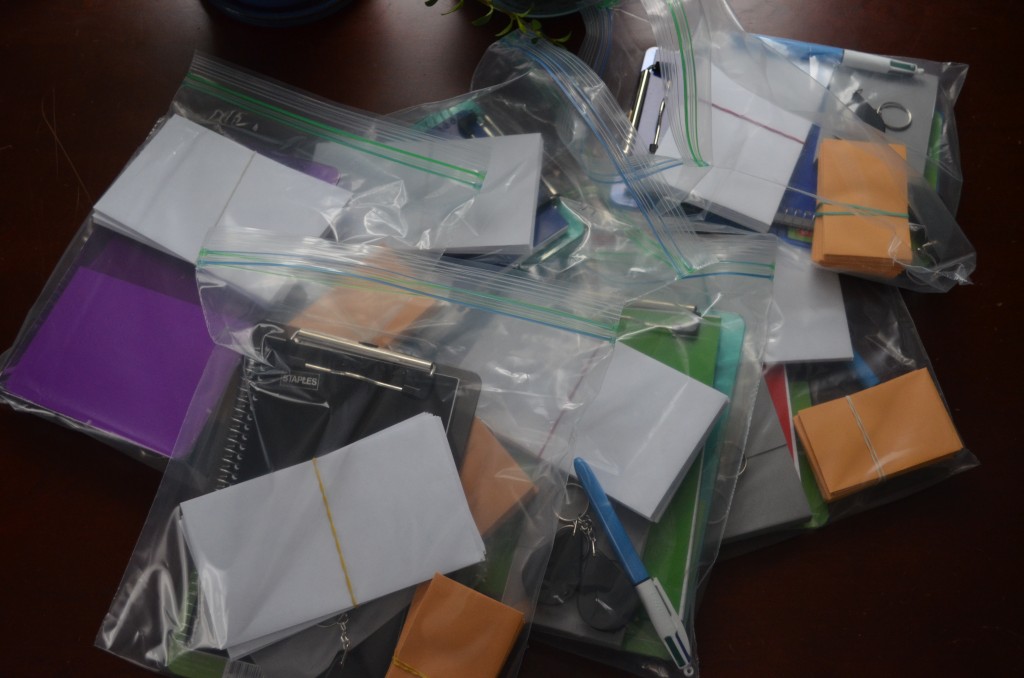 Here is what I have collected so far: 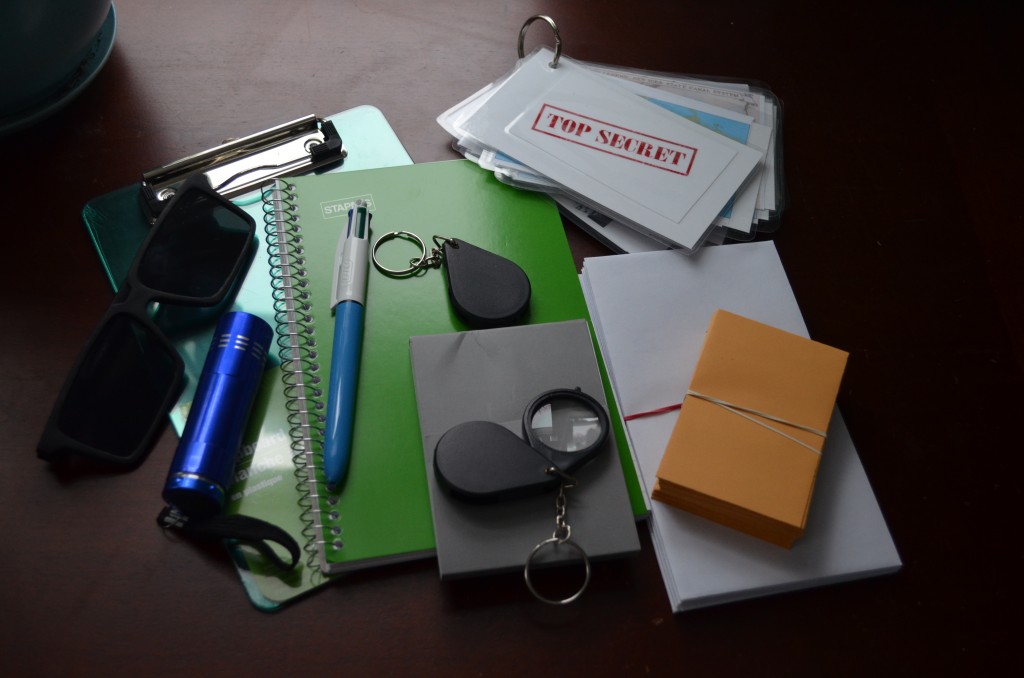 For the ring of spy information, I searched Google Images for the following terms: maps, finger print guide, blue prints, shoe prints, animal tracks, writing codes (I ended up with Morse Code, ASL and Braile alphabets. Check this Morse Code thing out, I never knew this, it’s cool), top secret, and treasure map. A few pictures of the collection are below, but I own none of these images, so don’t look too closely lest I’m violating copyright laws. From Google Images, I saved the images to my desktop, dropped them into a Word document, tried to make them about 3×5 inches, printed out a copy of the collection for each Agent, cut them out, put one image on each side of a blank 3×5 index card, laminated them, cut them out again, punched holes and put them on a ring. It took me a long time to do all of that. I picked some random enough things that the kids might enjoy using them as props in their play (not that they need help in the creativity department). 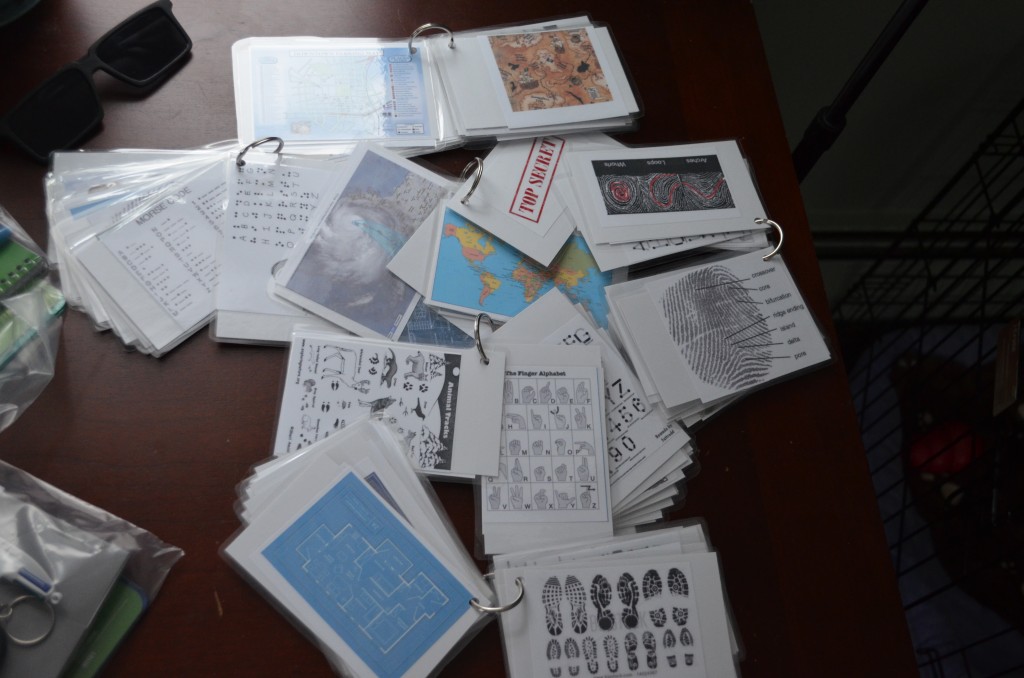 I could add so much to these bags, but I’m not sure I will add too much more between now and Christmas. I think when our summer visit rolls around we can create some new kits to put in the bags if they are still interested. Here are some other ideas that I may add now or later:

I know there are a few other things I’ve thought of before, but can’t think of now.  Also when I was putting this together most of the items came in pairs or sets of 6, so I ended up having the stuff to put one extra kit together. If readers are interested, we can do a TCM giveaway.
Do you have any great ideas to add in?