It’s been a couple years since I wrote about Freezer Egg Sandwiches, but they are still going strong in my house. Egg sandwiches are still a big staple dietary element in our house and one of the only foods everyone in the house likes (the only other unanimous yes foods I can think of at the moment are popcorn and big soft pretzels). Egg sandwiches are quick and easy, packed with protein, can add different flavors (with bread or wraps, bacon, sausage, condiments, vegetables, toppings), portable, and we like them for any meal of the day. We like them homemade, at restaurants and store bought. 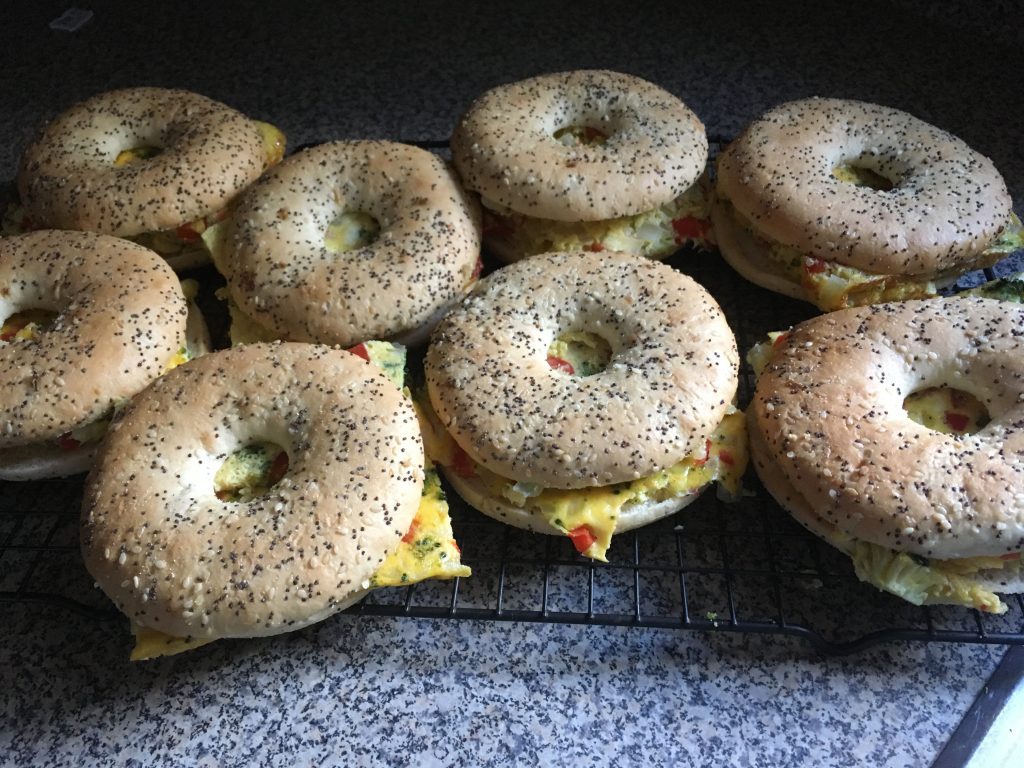 The top voted egg sandwiches from my kids are homemade egg and cheese on store bought Breugger’s bagels, Starbucks Bacon Gouda, and (typically only reserved for 6am hockey games) McDonald’s Bacon Egg biscuits. I truly think it’s been 7 years since we’ve been to McDonald’s for a meal other than breakfast because the oil doesn’t agree with two of my kids or I. But the coffee is good and McDonald’s reliably listens and responds to custom orders. One of my kids doesn’t like cheese which makes most store bought egg sandwiches difficult or impossible – Breuggers ALWAYS puts cheese on no matter how many times we ask and warn them to double check in advance, Dunkin, Starbucks and others tell us sandwiches are pre-made/pre-packaged. One place (I think it’s Dunkin on bagel sandwiches) says they need the cheese “or else the whole sandwich fall apart” and even if we say we don’t mind, they refuse. We tried multiple stores and they all had the same story. 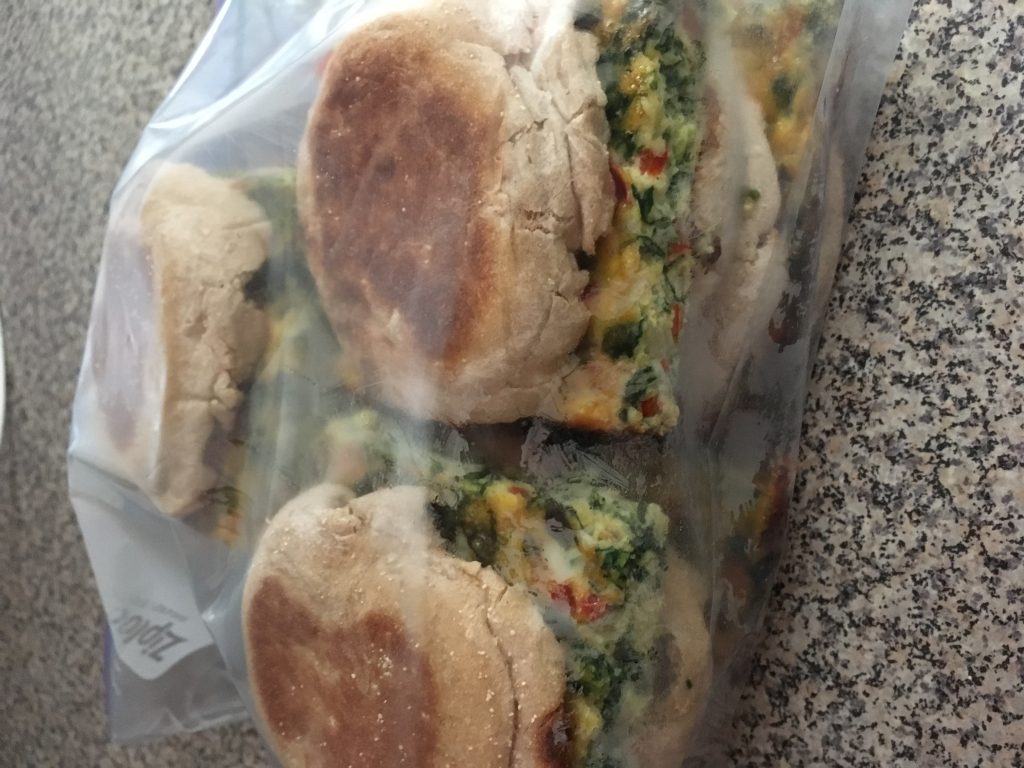 One of MY top favorite egg sandwiches is the western at Wegmans. As you know, reverse engineering, experimenting, challenges and saving money are some of my favorite things, so I often try to recreate the sandwiches at home. I can’t get my home versions to have the same flavor, or the egg to be quite so puffy or have the same texture (which I can only describe as moist, but I know that word creeps people out). But what the experimenting has inspired me to do is revamp my freezer egg sandwiches, and I’m really enjoying having them on hand for a quick warm no mess breakfast or lunch for myself. I’ve been making batches twice a month for the past 3-4 months. No one else likes veggies in their sandwiches so I never run out unknowingly.

I buy a pack of whatever bread I’m going to use. In effort to stay healtht, it’s typically bagel thin, whole grain burrito size wraps or light wheat english muffins. These generally come in packs of 6-8, so that’s how many sandwiches I make at a time. I chop up and sauté whatever vegetables we have around that sound good or that need to be used up. That has been onion, red pepper, garlic, broccoli, and sometimes starting to get soggy baby spinach. I’ve also thrown in zucchini, leeks, and other peppers when they were on hand. 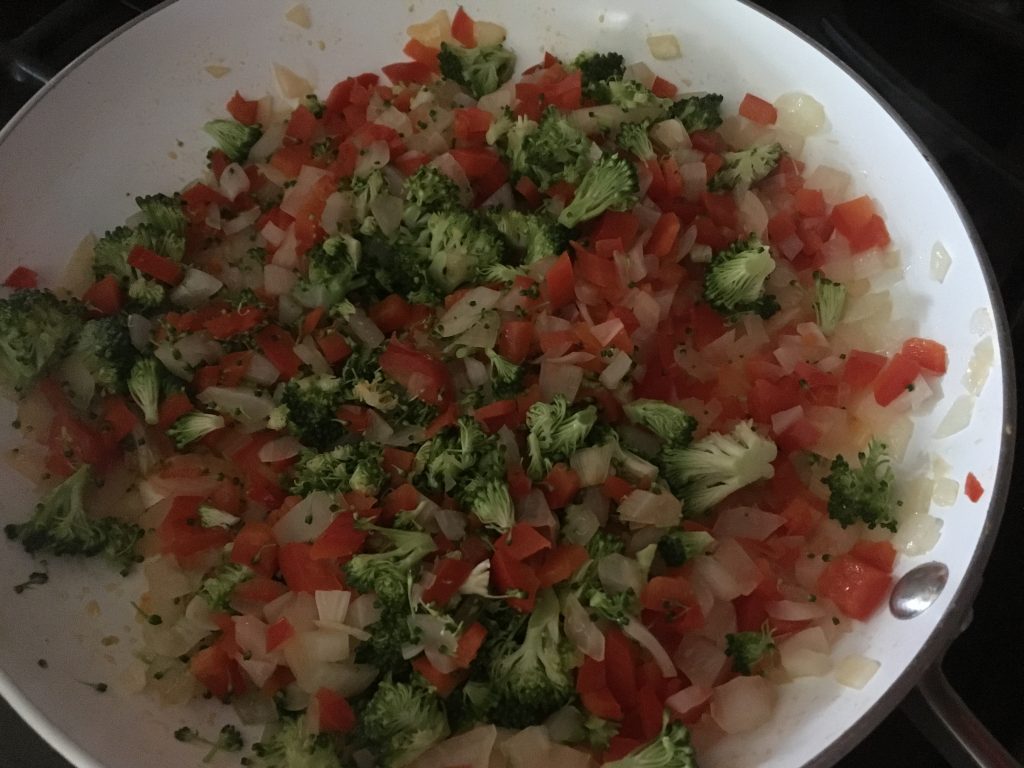 I mix 8-10 eggs and a few tablespoons of water. I give that a good whip with a fork and then I dump in the sautéed vegetables and stir it up. Next I poor the whole mess in a baking dish sprayed with cooking spray. I’ve used a lined cookie sheet/jelly roll pan, a nonstick metal baking dish (like used for brownies), and a glass baking dish. I liked the glass baking dish the best because everything stayed more moist (sorry), popped out easily, cleaned up easily, and I could use a knife to cut without worrying about scratching non-stick pans. 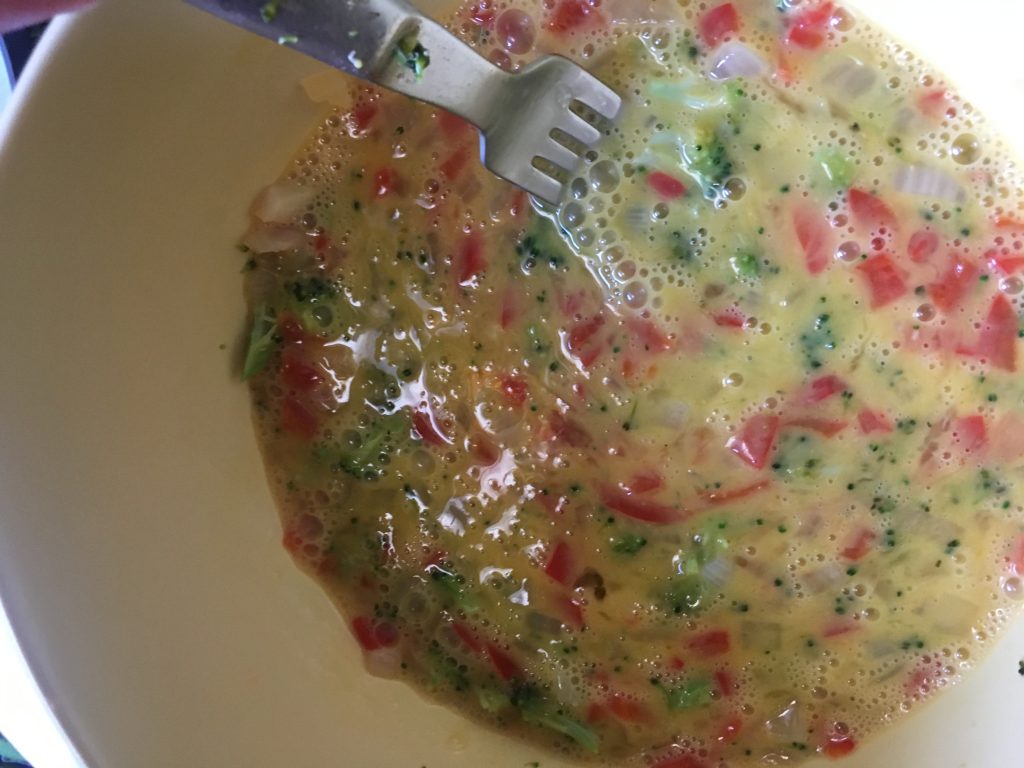 I bake the egg and vegetable mixture in a preheated oven at 350 degrees until it was completely set, which varied based on how much and was in the dish and the size/material pan I used, but somewhere between ~25-40 minutes. 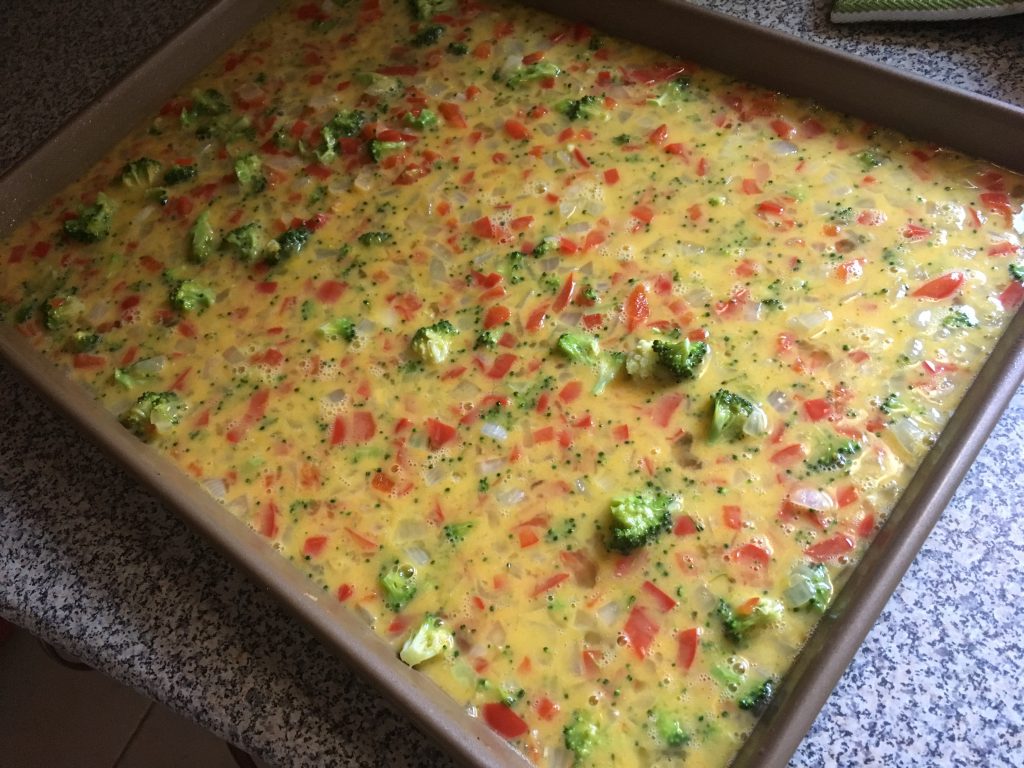 When it the eggs were baking I toasted all of the breads (if I wasn’t making wraps), which isn’t necessary, but one of the reason some store/restaurant sandwiches are my favorite is the texture contrast between nicely crispy toasted bread edges with fresh bread insides, the softer egg and maybe a creamy cheese. When I reheat the frozen sandwiches, they typically end up slightly (though not horribly) soggy on one side, so pre-toasting doesn’t really matter, but I still hold onto the thought that it helps. I have also buttered the bread after toasted, but pretending I’m healthy, I haven’t been lately. 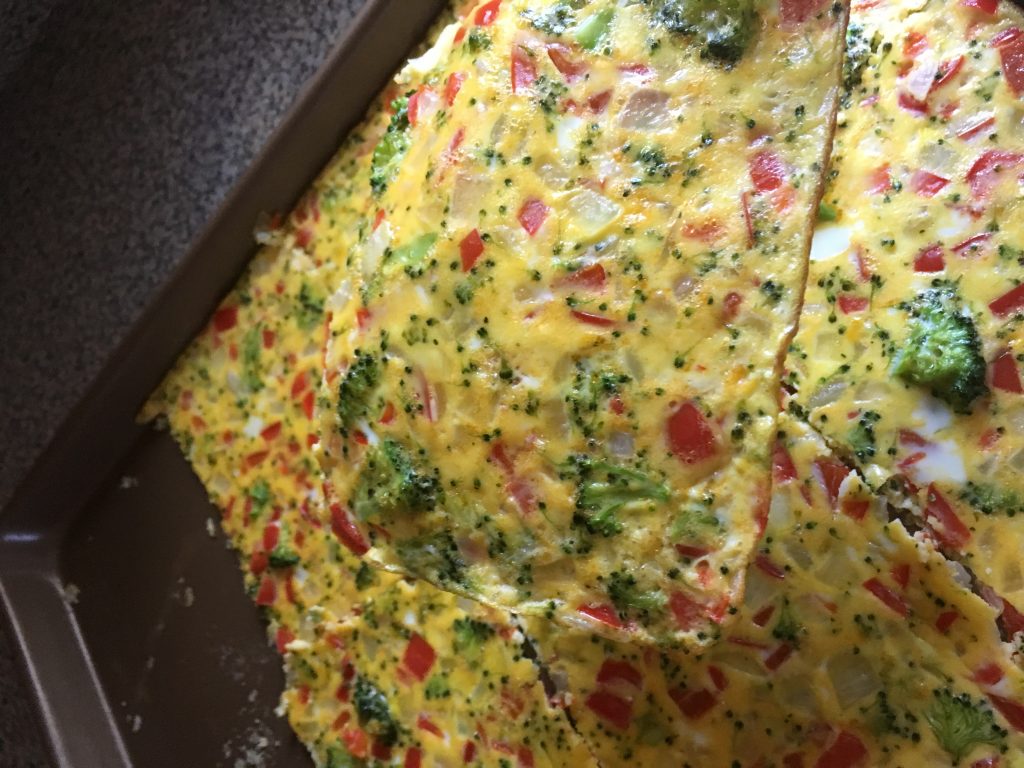 If I don’t let the the bread and egg are completely cooled before freezing, I’ll get a lot of frost and more chance of freezer burn if I don’t eat them quickly and/or soggy outcome when reheating. I never leave them in the freezer long!

Once everything is cooled, I cut the egg into squares, put them on the bread and freeze, usually in the bags the bread comes in if everything fits. I eat the sandwiches within a couple weeks, but if it were longer, I may want to put them in a more air tight container. I’ve also used ziploc bags and rubbermaid containers in the past for egg sandwiches.

When it’s time to reheat, I might put a piece of cheese on or meat from the fridge if there is something there (I’ve used ham or turkey, bacon, sausage, pepperoni and a couple times leftover taco meat), but with the vegetables added, there is usually enough texture for me. After I heat the sandwich up I’ll sprinkle some Frank’s Red Hot on the egg (I’ve also used Gulden’s Sriracha mustard which I don’t like as much, but a change!) I’ve also added avocado, lettuce, tomato and pesto (not all at once) after heating it up. 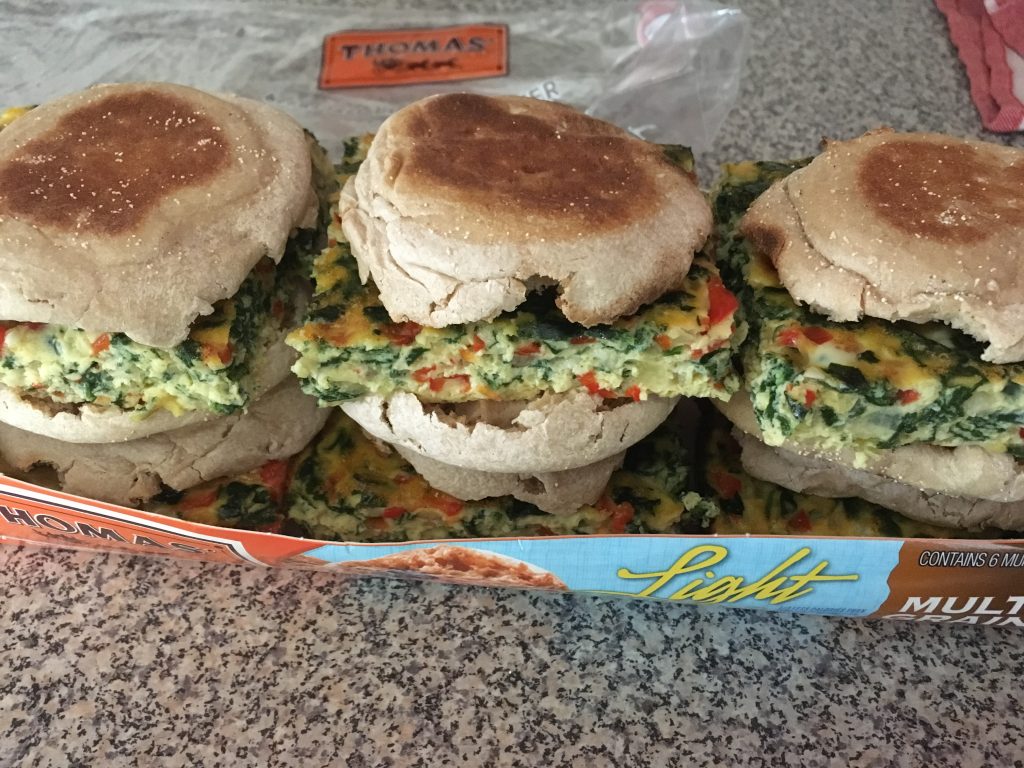 I still like the sort of crepe method for making my kids plain freezer egg sandwiches mentioned in my post a few years ago, but if you or your kids like (or will tolerate) more in your sandwich, this is a very quick and easy to make method! 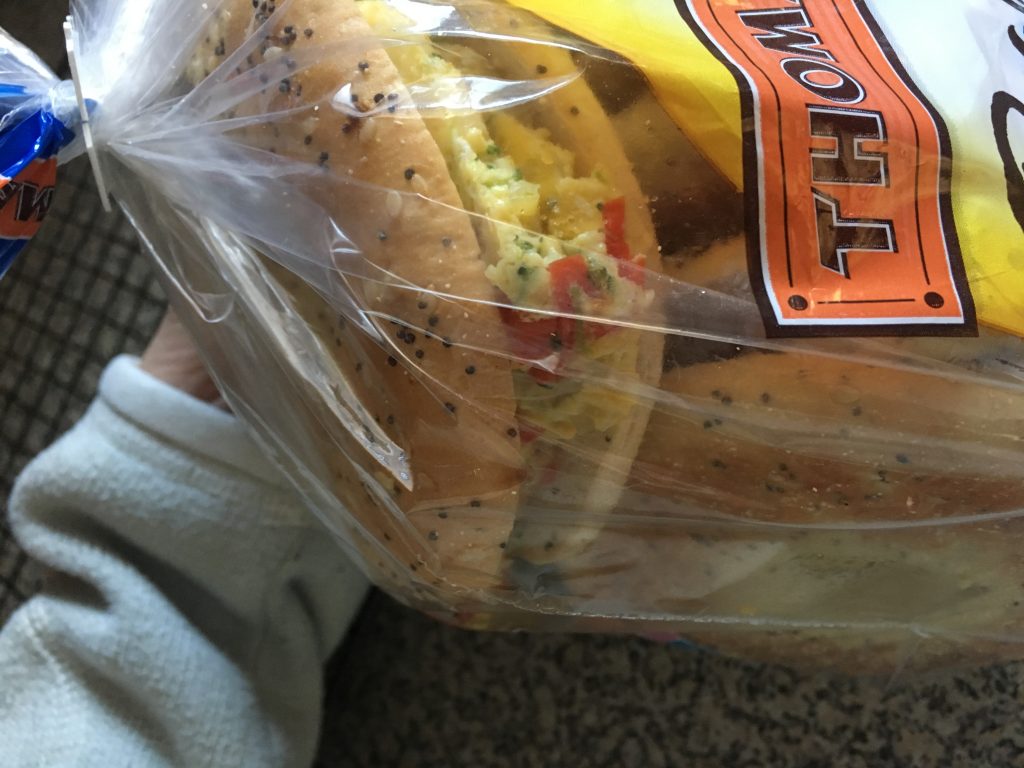