Something that I have harbored an odd sense of guilt about and often wished I was better at completing, is making my own broth/stock. I have tried it before, so I know that it is a simple and easy concept. But when I’ve made stock at home, it has tasted greasy and not flavorful, and I never wanted to use it for soup or something else. I should care about cutting back on salt and stuff that’s in commercial stuff, but it just tasted so much better.

The guilt stuck, because I figured, if I worked on it, I could make palatable stock at home. So the biggest issue I come across in making homemade broth/stock (I don’t know if there is a difference, by the way) is that I don’t like to keep extra stuff around and my body/mind “has” to clean and close down the kitchen after dinner, and I go to bed early. To make stock, I either have to stay up late mucking up my kitchen or put post-dinner scraps in the fridge or freezer for a while until I take on the project during the day. I know people recommend keeping scraps in a bag in the freezer and adding to it. I’ve tried this a few times, but then I just end up throwing it out when I need freezer space or feel like there is trash in my freezer, or just feel guilty that I don’t want to think about tasting another gulp of greasy broth that took me 6 hours to make.

I was reading about the benefits of drinking bone broth a few months ago and the blogger (once again,I’m not sure where, it may have been Homemade Mommy or a link from her, she’s always going off on bone broth) mentioned she kept a crockpot on the counter of broth ingredients and would take a serving out, replace some water, repeat for a week or so, and then replace dump it all out and start again. Too much sitting around food grosses me out, but broth in the crock pot? I can do that. 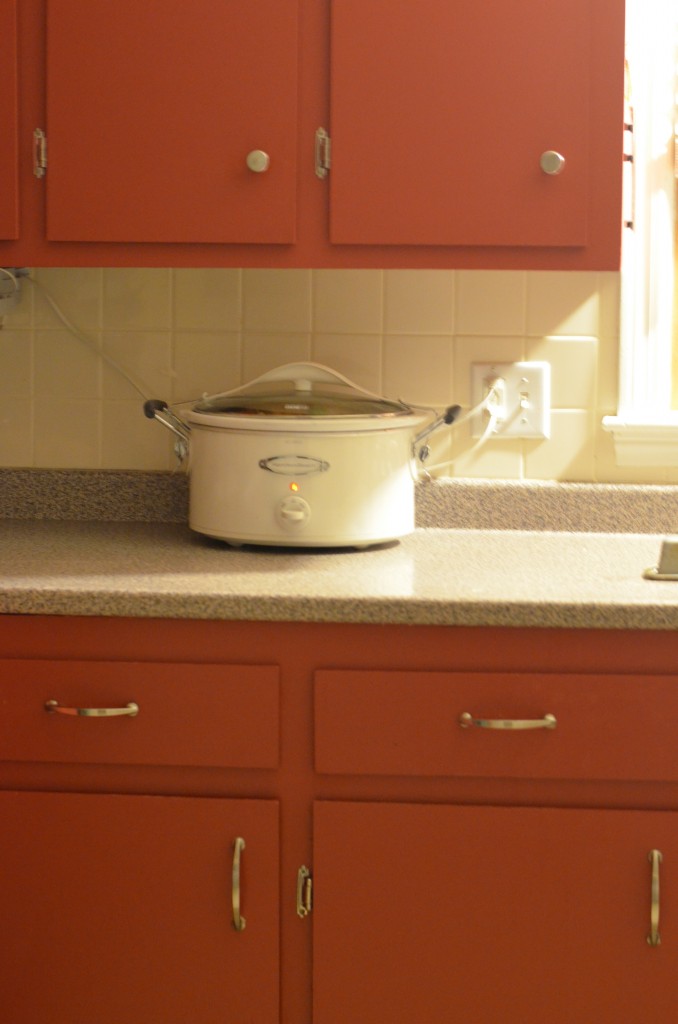 This week with husbands out of town, an array of soccer practices, Back To School Nights, and other activities, I had a complex childcare swap arrangement with a friend. I had the combined families’ six kids for dinner and had rotisserie chicken, mac & cheese and cut up veggies. After dinner I stripped the chicken of “good” meat and dropped it in the crock pot with a chopped onion, leftover carrot and celery sticks, a bunch of fresh parsley, some rainbow chard that was starting to wilt, and right at the end  I dropped a few florets of broccoli that the kids didn’t eat at dinner. I filled the rest of the crock pot with water, set it on low and cleaned up the kitchen.

My friend came to pick up her kids and warned me that she’d tried this before and the bones can get really soft and be difficult to strain out. So I guess people are doing this all over the place behind closed doors while laying in bed. Friends, why didn’t you tell me about crock pot broth sooner? Hopefully you all know about this already. But it not, I wanted to share it with the world, it might help you out. 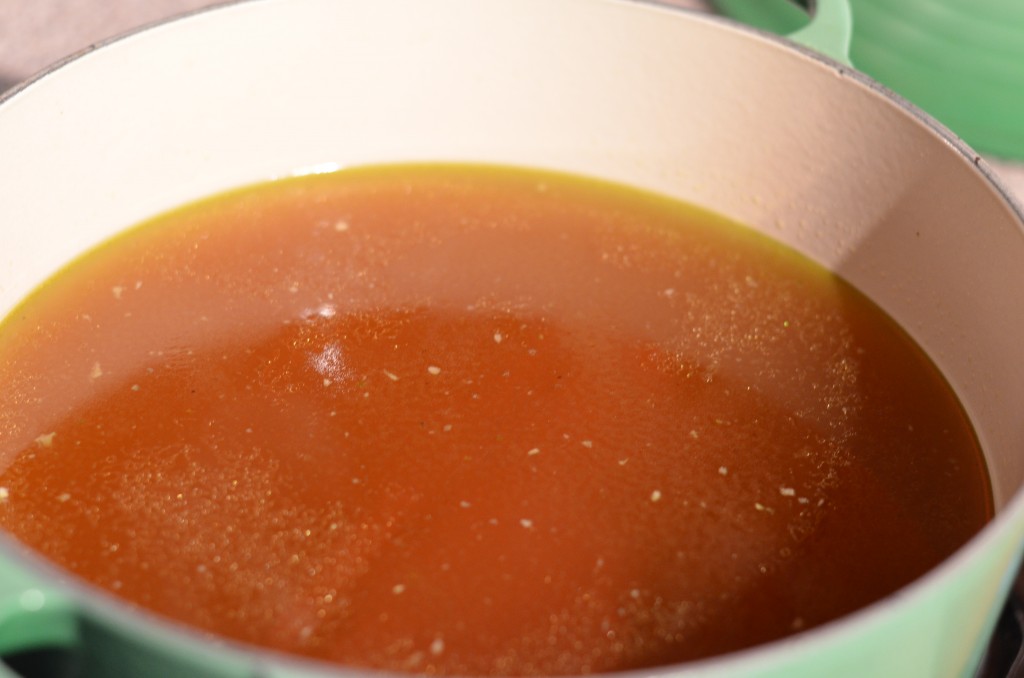 In the morning, soft bones wasn’t an issue with this batch. The few florets of broccoli may have been a mistake though – the kitchen smelled like Panera Cream of Broccoli soup, and the first taste was very strong on broccoli, but it go away once vented for a while. I strained the broth in a sieve with no problem. Worried about soft bones, I originally lined the sieve with some cheese cloth we’ve had in our cabinet for 6 years and never found a use for, but when I poured everything into the sieve, the cheesecloth just slipped down into a ball and probably didn’t do much extra straining. 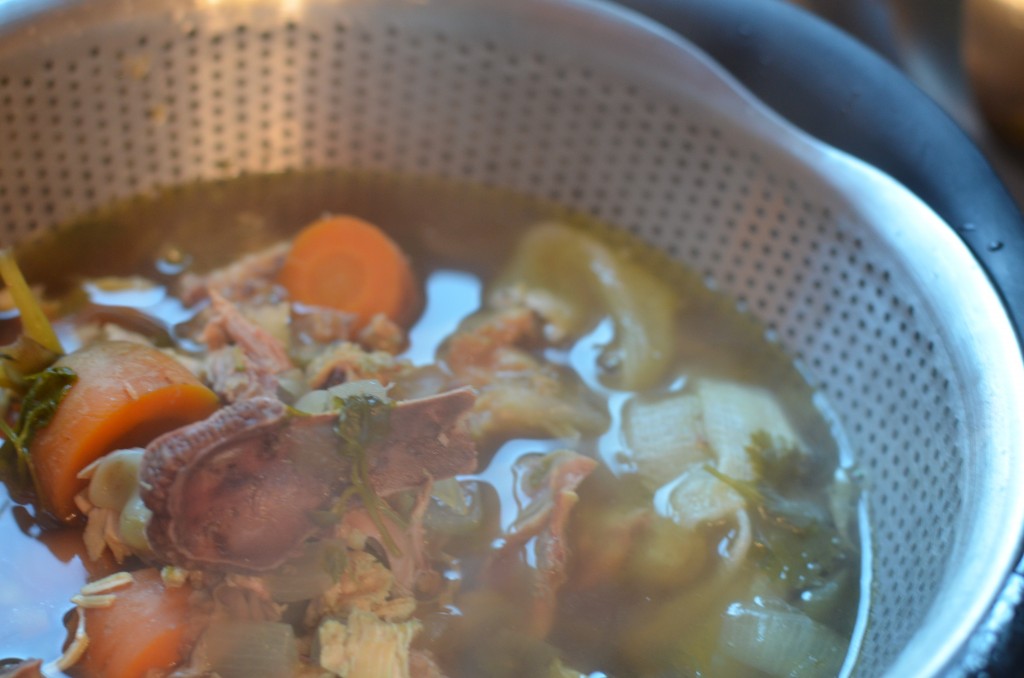 This broth was good. I had used a grocery store rotisserie chicken, so I didn’t add any salt or pepper knowing the chicken was likely salty enough and I could add salt later. I would have added a bay leaf but couldn’t find any in the pantry when I was throwing things in (I found some later) – I think the parsley, chard and broccoli added enough “fresh” taste. I was a little worried the chard might add too much red or green coloring and scare off my kids, but it was fine.

With all of the solids filling the crock pot, I didn’t think I’d end up with much broth, but I drank some plain, put a little in the freezer, and I made chicken noodle soup for the kids and I for dinner, so it was definitely enough that I think the endeavor and vegetable investment was “worth it.”

My kids all commented that it didn’t taste at all like they expected the broth to taste in their noodle soup, but they all liked it. It definitely wasn’t salty, but we didn’t need to add salt, and it had a lot of flavor. It wasn’t greasy or fatty.

I wouldn’t have changed a thing. And I’m definitely going to do this again when I have leftover bones and will try throwing in different combinations of whatever is in my veggie drawer, I’ll maybe even start saving scraps in a freezer bag again.

Cheers to you, Crock pot! 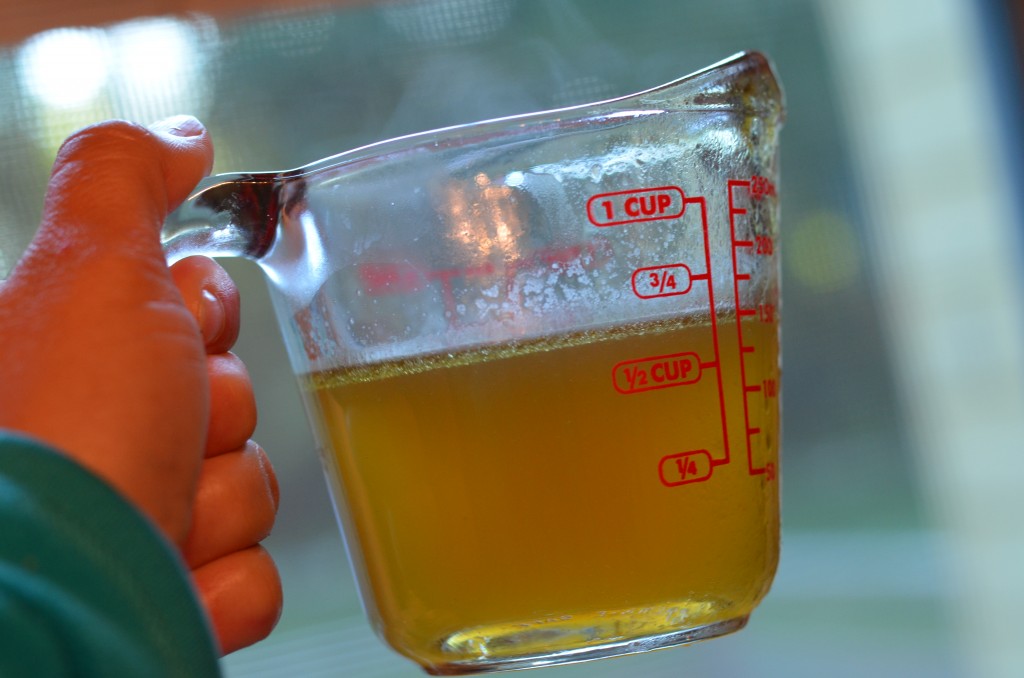