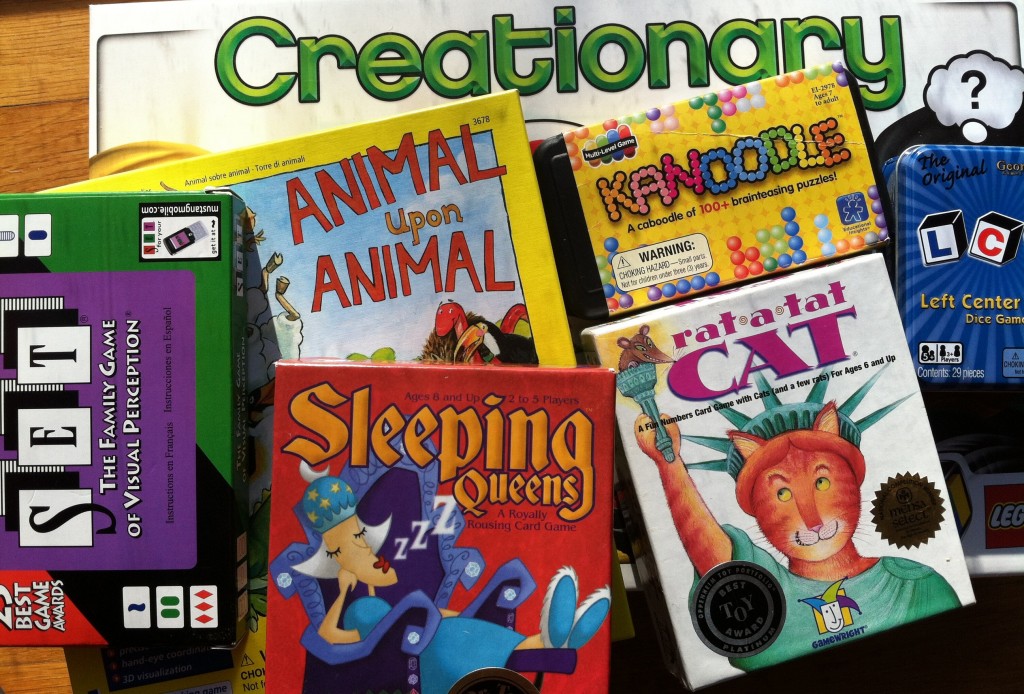 I thought I would give an update on the games in our house. I posted before the holidays inquiring about games. Check it out here. We got some great suggestions that I wanted to share. And update you on what we have thought of them.

Since the last post about games we have acquired: Set, Rat-A-Tat-Cat, Sleeping Queens, LCR, Kanoodle, and Creationary.

Rat-A-Tat-Cat is the all house favorite. It can be played easily by my 4 year old and the 7 year old loves it too. I love it because it can be played short or long. So between loads of laundry and checking on dinner I can play a hand or r sit down for an hour and play several. It is all about numbers, memory, and cute rats and cats. The goal is to get the most cats and the lowest number in your hand.

Sleeping Queens is also a hit. My littlest one doesn’t mind this one. She likes collecting the queens and describing them. The seven year old knows all the rules and we follow his lead.The rest of us can’t play with out him.

Kanoodle is a good play-by-your-self game. It comes with a book with many levels of challenge to put together the puzzle either flat or in a 3D pyramid. It says 7 years and up, but there are plenty of suggested puzzles that the four year old can do.

Creationary is from LEGO. It is like Pictionary, but with LEGOs instead of drawing. It is fun, but long and can only be played really with the 7 year old.

Set we need help with. We love Spot It and Set seems similar in that you lay out the cards and need to find the matching ones. However the instructions seem to contradict them selves. The pictures in the instructions show one kind of match and the words describe another kind. We are confused. Jenny you and the fam need to come over for Set game night and help us figure it out.

LCR is fun. It is similar to the dreidel game. It would be great to play with a large group.

I just picked up Pairs in Pears today I’m curious about it.

We have Animal Upon Animal which is beautifully made, but it is a little too young for the big kids and the 2 year old isn’t quite ready for it. It is fun to play with the wooden animals by them selves.

On the list to try: Headbanz , Blockus, and Apples to Apples Jr.

What are you playing these days?